20 Things You Might Not Know About Africa Albida Tourism 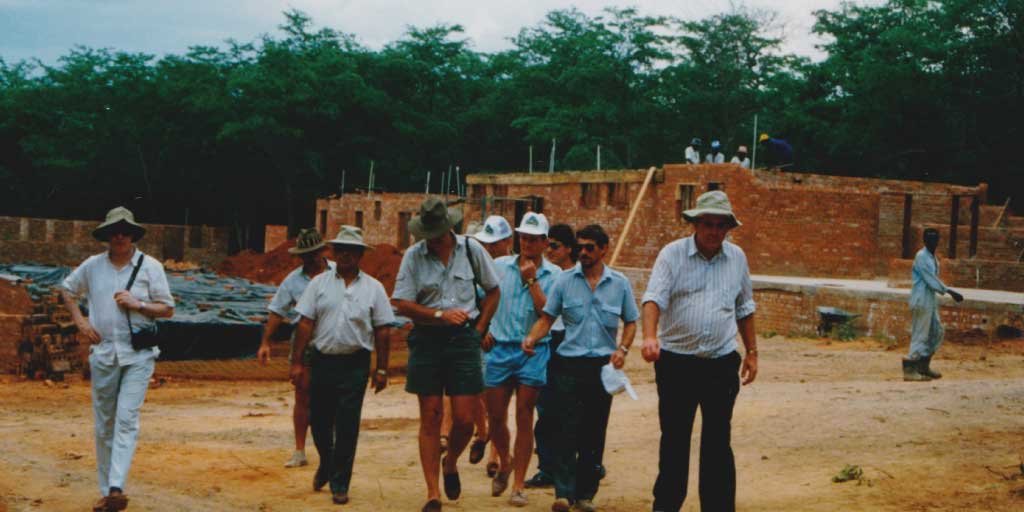 Dave Glynn and Ross Kennedy, the intrepid founders of Victoria Falls Safari Lodge and its parent company, Africa Albida Tourism, got together recently to brainstorm a few facts about the 20-year-old business that people might not know.

It turned out to be an utterly fascinating conversation, accounting for two decades of challenges, tragedies, opportunities, successes and quirks that make up the company as it is today.

Here are 20 of the best facts:

1. Dave Glynn discovered the location of the Victoria Falls Safari Lodge whilst on a run.

“I was at an industrial congress,” says Dave, “and I was so frustrated, I went for a run and  stumbled on this site, and I thought well I should build a hotel here.”

“In the main building of the lodge, as they were thatching, the plumbers were welding the very top of the central block, and the apex, caught on fire. Fortunately, it was smouldering and it didn’t actually burst into flames. We were only about two months away from opening.”

3. The founders nearly went broke 6 times whilst building the hotel 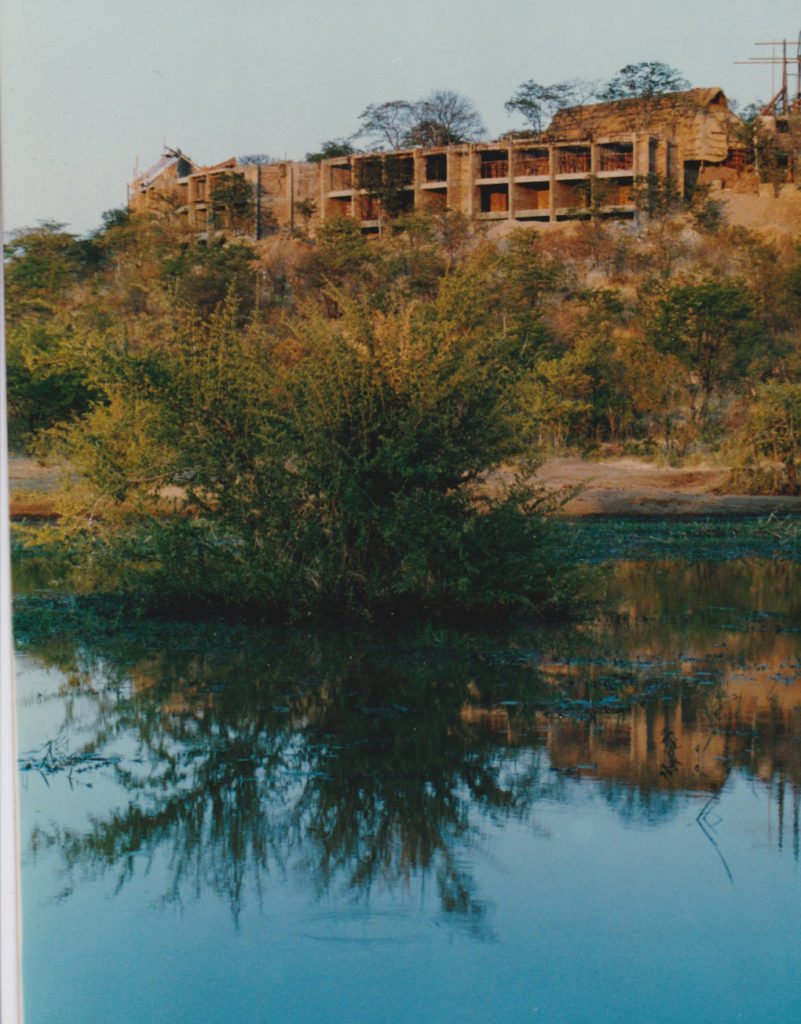 4. AAT was the first organization to hire an environmental architect 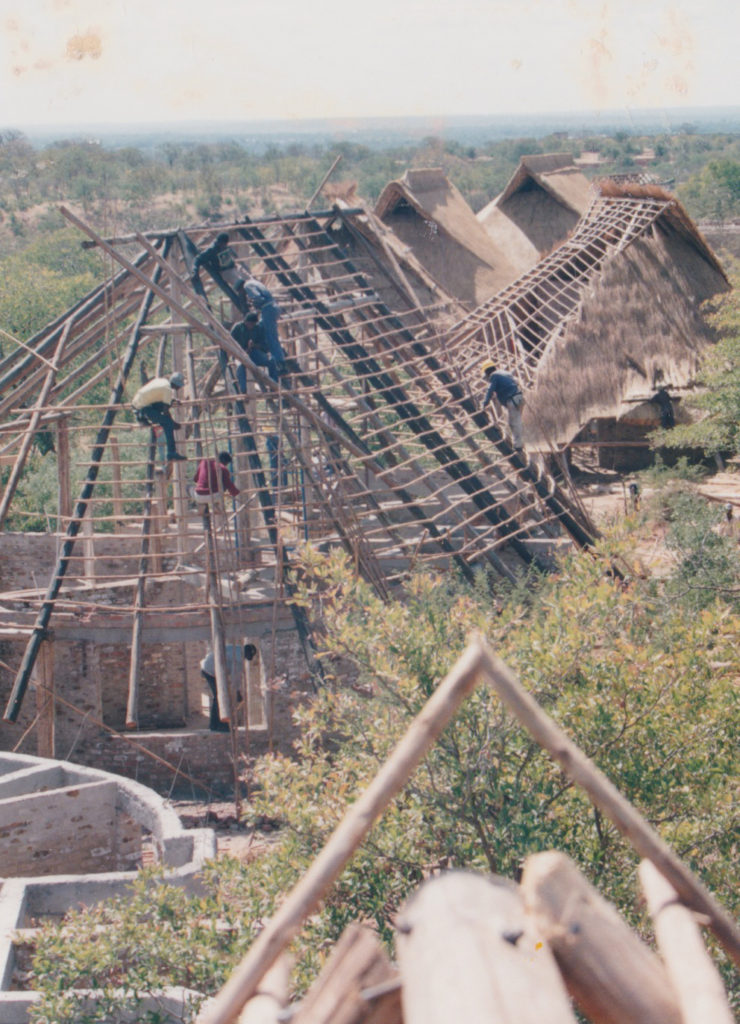 5. How did the Buffalo Bar get its name?

“When we were building the lodges,” says Dave Glynn, “we would sit every night on the hotel site and have a few beers. And every night, the buffaloes used to come in. By the end of the dry season, that herd was over 800 strong. It would take an hour and a half to come in. So we would watch the dust and they would keep on coming for an hour and a half.” 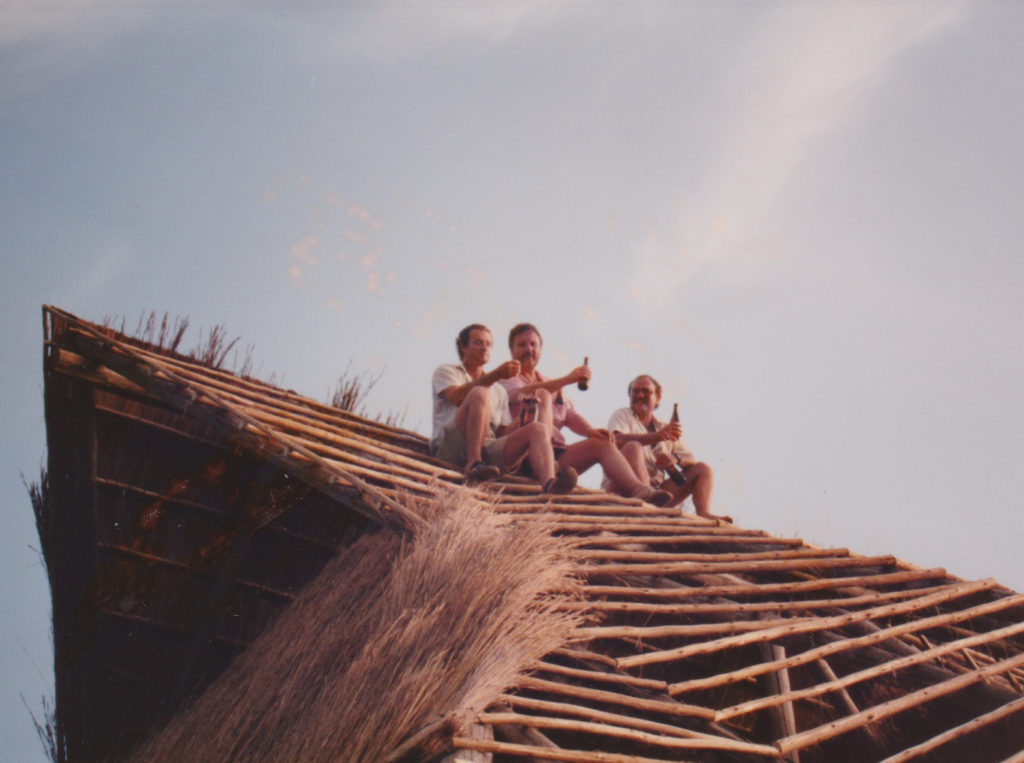 6. The swimming pool was delayed by four months because of a tree

“I refused to allow them (Josh and his team) to cut it down,” says Dave.” Eventually they came to me and asked if they can transplant the tree, then put the swimming pool there. And I said ‘yes, you can’. And that tree survived for a very long time.” 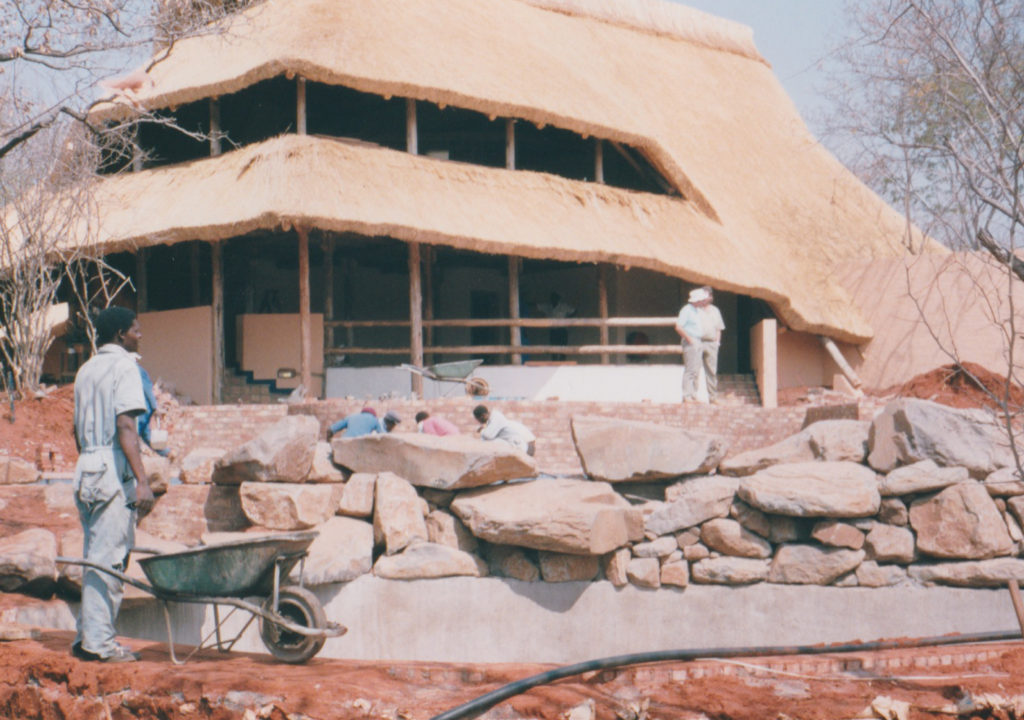 7. An old lady lost her two front teeth whilst looking at the view

“There was another tree that was outside the ladies and gents toilet. I refused to allow them to remove it too. So they built the patio and the walkway around the tree. And it was there for many years. We called it ‘Two Front Teeth’ because there was an old lady who was so enthralled by the view that she was walking along the passage way, looking at the view and turning, and she walked straight into the tree and knocked her two front teeth out.”

8. Ross Kennedy, Dave Glynn and architect Josh Ward travelled to Kenya and visited 29 lodges in 7 days to get an idea of how to build the safari lodge

“Josh ward and I had many arguments. But one of the arguments I had was that I wanted to go up, and get height to get more of a view, and he wanted to go out and down and up. So Ross, myself and Josh went to Kenya for a week and we visited 29 lodges in seven days and nights to get the best ideas. Josh won that argument. ”

9. The apex of the building is in a direct line with the Falls.

“If you take a straight line from the apex of the main lodge, you will be directly in the line of the falls. It was one of Josh’s quirks. And he was really angry because he was two degrees out.” 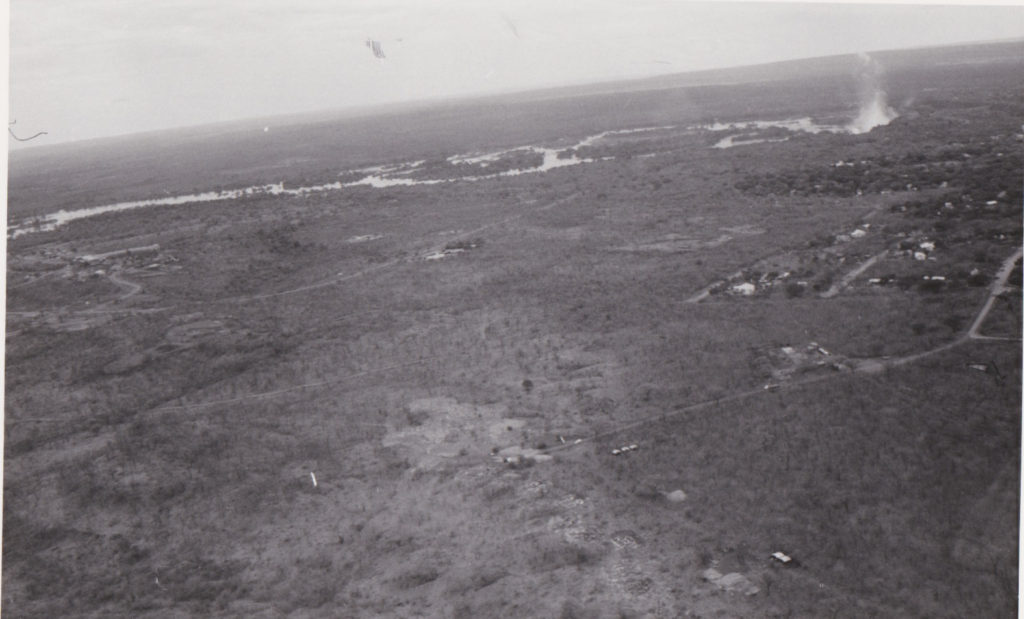 11. The fence surrounding the property was only put up in the beginning to keep people out (not animals)

“I was called on site, to a meeting with the entire board of National Parks at the Boma,” says Dave, “because they were incensed that we were putting up a fence along the back of our property. It transpired that they thought we were going to put a fence around the property and keep animals inside. And in fact the reason we were putting a fence up was to keep people out. And allow the animals free access.”

12. The waterhole was previously an old disused gravel pit

“60 years before, when the town was being developed, they scooped away all that red dirt and just left bare rock. But over the years the rain washed in, and there is quite a lot of clay, so it just sealed itself and made its own waterhole for four or five months of the year. All we did was then put permanent water in and brought in plant material from the river, bream and other fish. And now it is its own ecosystem, as long as we continue putting water in there.” 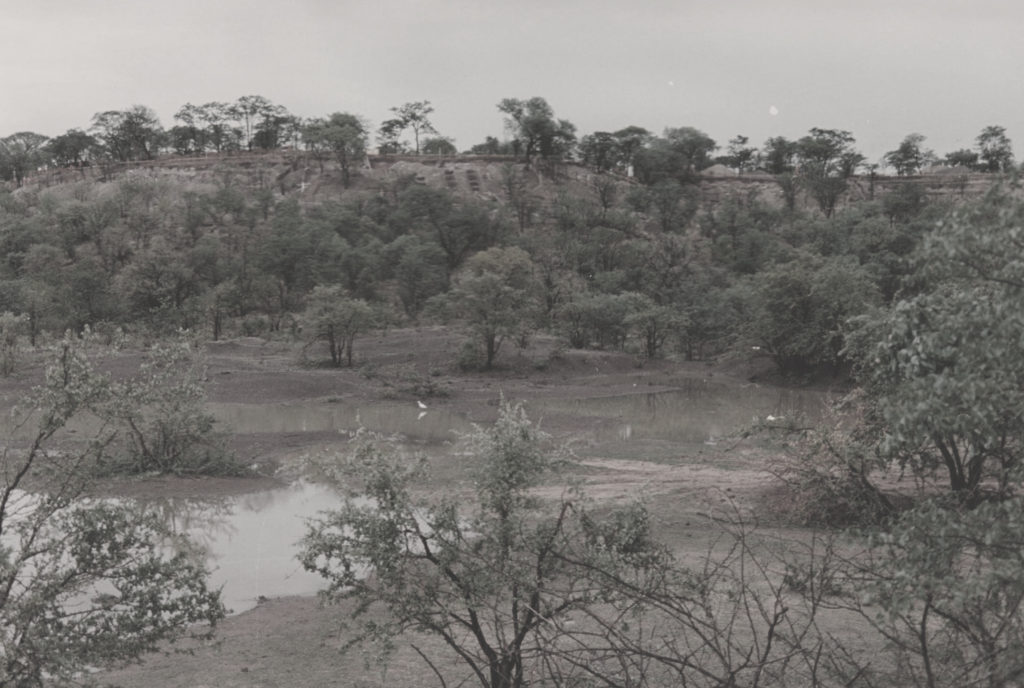 14. A lightning bolt struck Lokuthula Lodges Number 18/19 right after the opening of the Safari Lodge.

“I was sitting at the Buffalo Bar and we heard the bang – it was blue skies overhead. I shouted to the guests on the lower deck: ‘What can you see?’ and they just said: ‘Smoke!’ I ran out, got in a vehicle and I was there within two minutes and there were just shells left – Lodges 18 and 19 had burnt down. And the storm did come… But it came from Livingstone well after the lightning. Maybe 15 minutes after the lightning it arrived.” 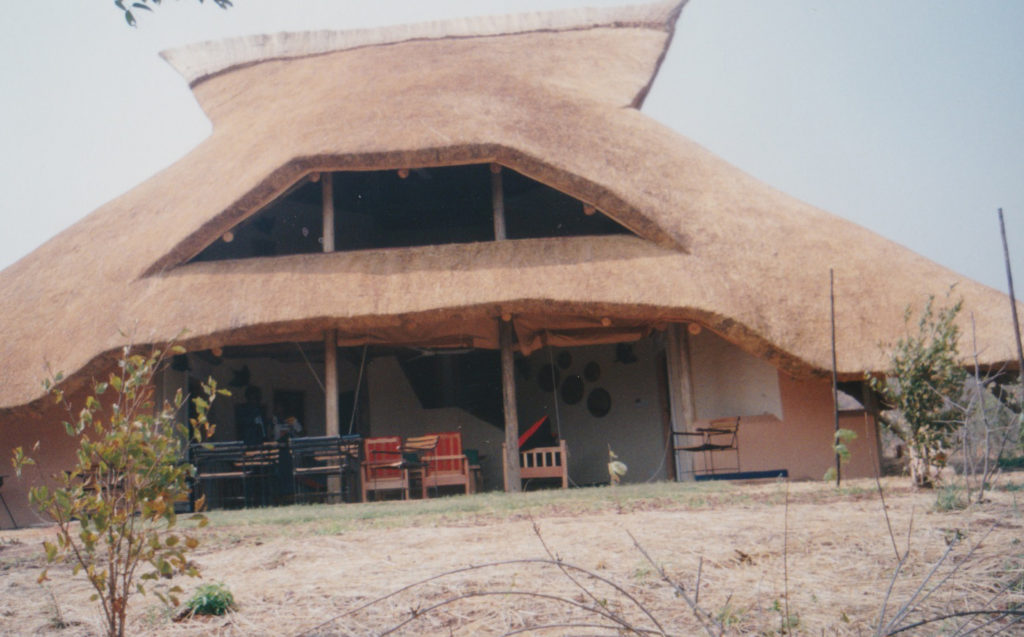 15. The baobab outside Victoria Falls Safari Lodge was brought over from Hwange.

“19 years ago we found this amazing baobab tree in an open cast mine in Hwange area, so we agreed to bring it to Victoria Falls. It was 18 metres tall and needed a low-loader to transport it the over 100km all the way to Victoria Falls. It was a mammoth task and we encountered various problems trying to transport this big tree over such a long distance. About halfway along, we hit a power line, electrocuting the baobab and singeing two metres off the top. In another twist of bad luck we got badly stuck on the Masuwe bridge coming into the Falls, holding up dignitaries from flights for three hours! She was a mission to replant, but because there is no tap root, so the transplant was possible. Thankfully, it survived the electrocution and is now thriving as you can see. 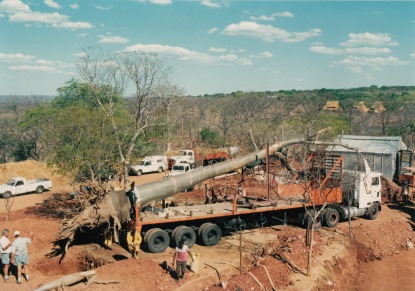 16. There are seven resident crocodiles in the waterhole 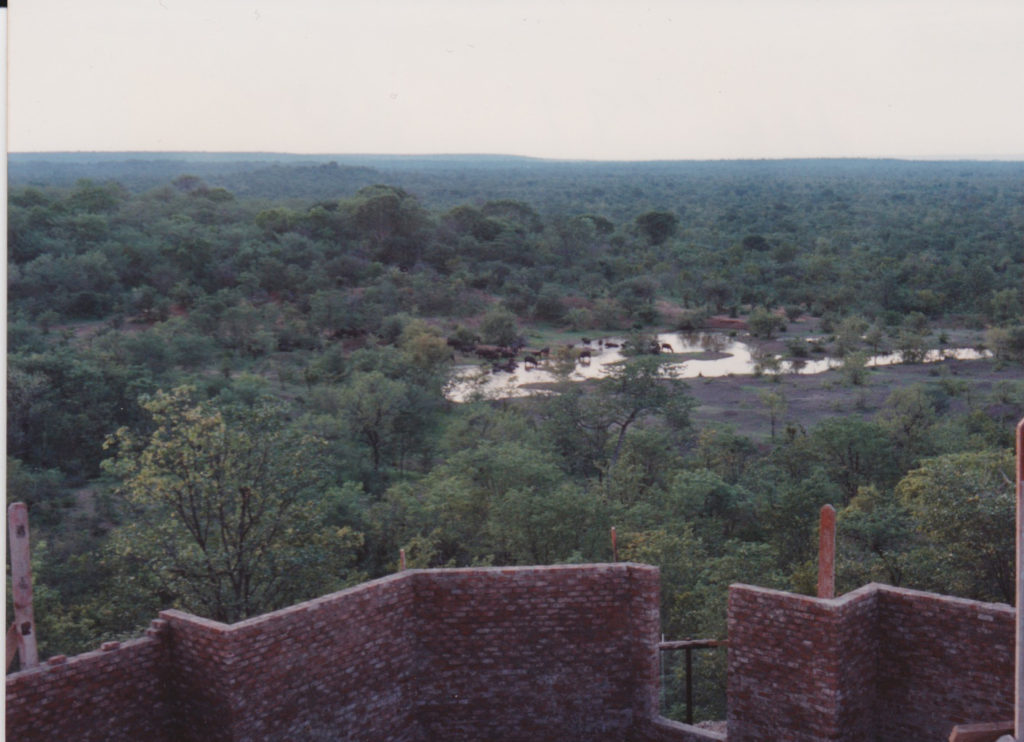 17. There are 24 long serving staff that have been with the company from the beginning

18. The Boma was built to obtain RCI affiliation

“RCI advised that because we were too far out of town, we had to have a restaurant, but as we could not afford to build a restaurant, we just built a kitchen, laid down some bricks outside and called it a ‘bush’ restaurant. It was a 60-seater restaurant and the waiters were the entertainers in the beginning. The restaurant was a failure due to the constant weather changes be it rainy/windy/cold or wet. One day I visited a friend of mine who was re-doing her roof with thatch. I saw this and offered her a job to come up to Victoria Falls and build the Boma, which she did, leaving her four kids at home. She went three times over budget, nearly made AAT broke, but we ended up with a restaurant seating 250 and she saved the Boma. From that moment we have never looked back. It was then called “The Boma: Place of Eating” 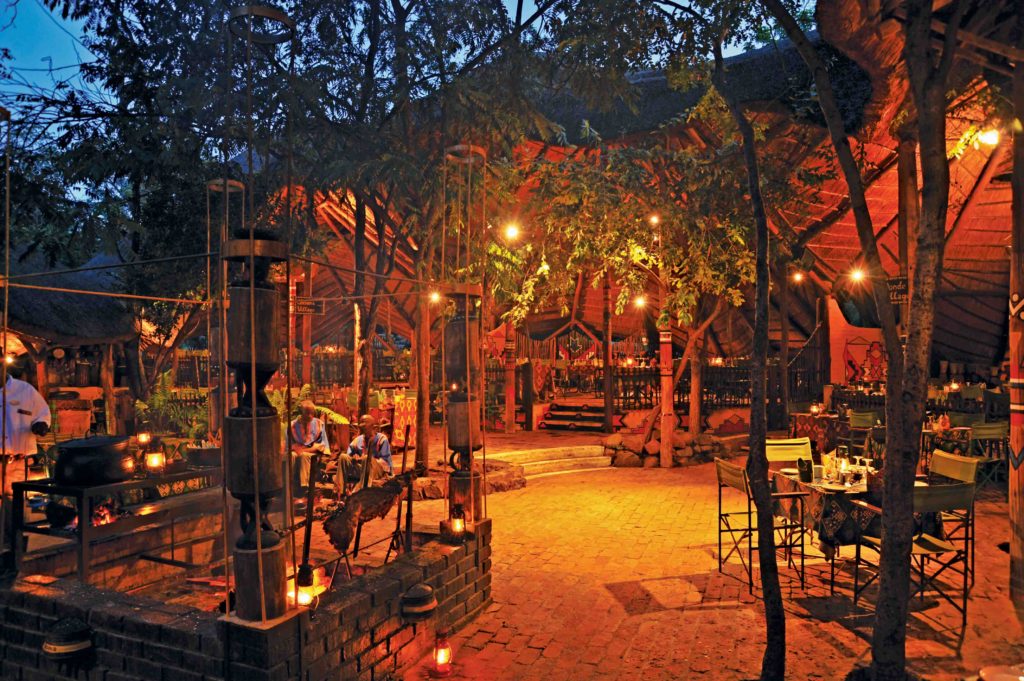 19. The story of the crocodile in Lokuthula Lounge.

“A four-foot long croc had taken a wander from the waterhole,” says Ross Kennedy, “and arrived in Lokuthula Lodge 15. Housekeeping called Lokuthula office, which is where I was at the time. We assumed that someone was confused, and it was just a monitor lizard or similar, and so wandered down there, to discover,  yes indeed this was a real croc lying in the corner of the lounge! Ray Stocker (RIP) who was our Estate and Wildlife expert at the time, was called. He captured it using a bath towel and took it back down to the waterhole for release, explaining to the croc that his place was in the water… not in the lounge of a Lodge!”

20. A Lion killed a buffalo by Lokuthula Lodges before the fence was erected

“There once was a lion kill a few meters in front of number 6 at Lokuthula Lodges on the front lawn,” says Dave. “The South African guests staying there at the time rolled up their blinds and sat drinking coffee, watching this pride of lions feeding on a buffalo, not even 5 meters away from them. The next thing, the guys from the next door lodge strolled over to number 6 to have a look, and then before you know it there are a dozen people sitting in the lounge at 3.00 am, drinking coffee and watching these lions feed, acting like they are completely safe and free from harm being inside the lodge.”