By Marianne Betts
It’s almost that time of year again, the time when thousands of runners descend on Zimbabwe’s top tourist destination to participate in its largest sporting event – the Victoria Falls marathon.

The Econet Victoria Falls Marathon should be on every bucket list. Where else do you get to run through a UNESCO World Heritage site, cross an historic bridge, catching a glimpse (and some spray!) of the Victoria Falls, one of the Seven Natural Wonders of the World, and perhaps spot an elephant or two?!

The event, organised by Wild Frontiers, Adventure Zone and Off 2 Explore, has grown hugely in popularity, from a few hundred running the very first Victoria Falls Marathon in 2006, to a few thousand runners last year. In the 2018 marathon nearly 2,000 Zimbabweans participated, more than 600 South Africans, and a good showing of Zambians, while the United States led the overseas contingent with 141 runners, followed by the United Kingdom, Germany and Australia.

Among the runners this year, will be a record field of 89 from Africa Albida Tourism (AAT), whose flagship property is the well-known Victoria Falls Safari Lodge, and among them will be the hospitality group’s most decorated runner, Casper Mpofu, who is hoping for a sixth win this year.

Mpofu has not only been the first AAT runner to complete the half marathon more times than anyone else, he has also run in every Victoria Falls Marathon … but he does have some competition in the form of his colleague Jaya Mapfumo! 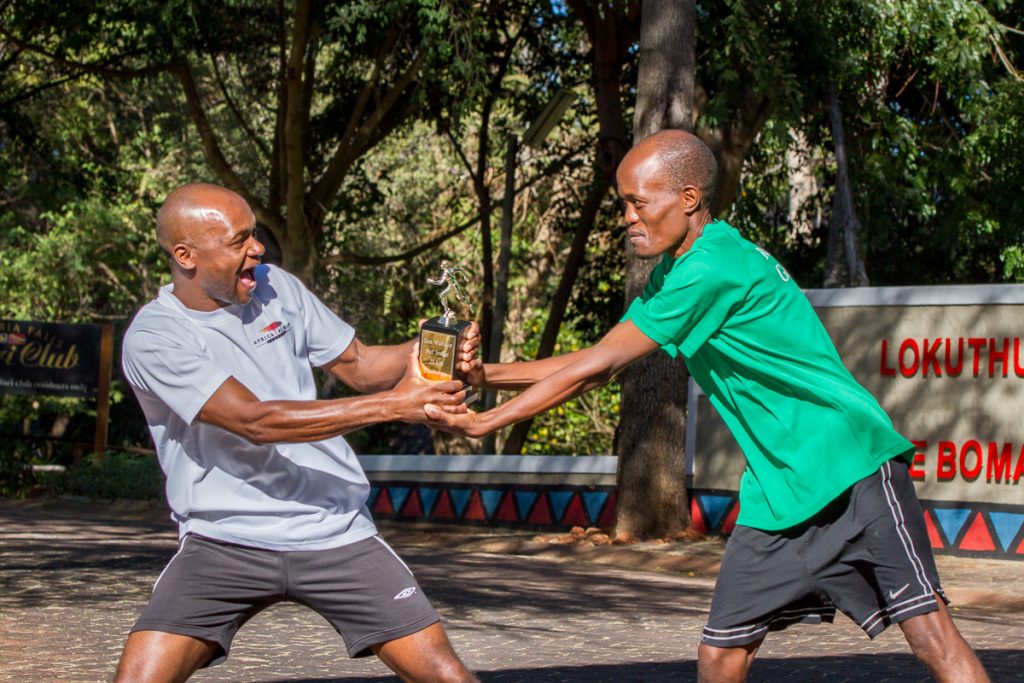 In the July 7 event, AAT runners will be raising awareness on the plight of vultures, which play a vital role in preventing the spread of disease, but are endangered due to a variety of human created issues, such as poisoning and electrocution by power lines.

The fastest AAT runner wins a trophy donated by Victoria Falls Safari Lodge regular guest and runner Ian Wallace, and both Mpofu and Mapfumo have their eyes on the prize.

Mpofu, 39, a housekeeping supervisor at Victoria Falls Safari Lodge, has been the fastest employee five times, with his best time for the 21.1km event being 1 hour and 29 minutes in 2014.

His closest rival is Mapfumo, 37, a housekeeper at Lokuthula Lodges, who has the edge on him in terms of age, and has beaten him once, a feat he hopes to repeat this year.

So, on paper, Mpofu looks set to dominate again. 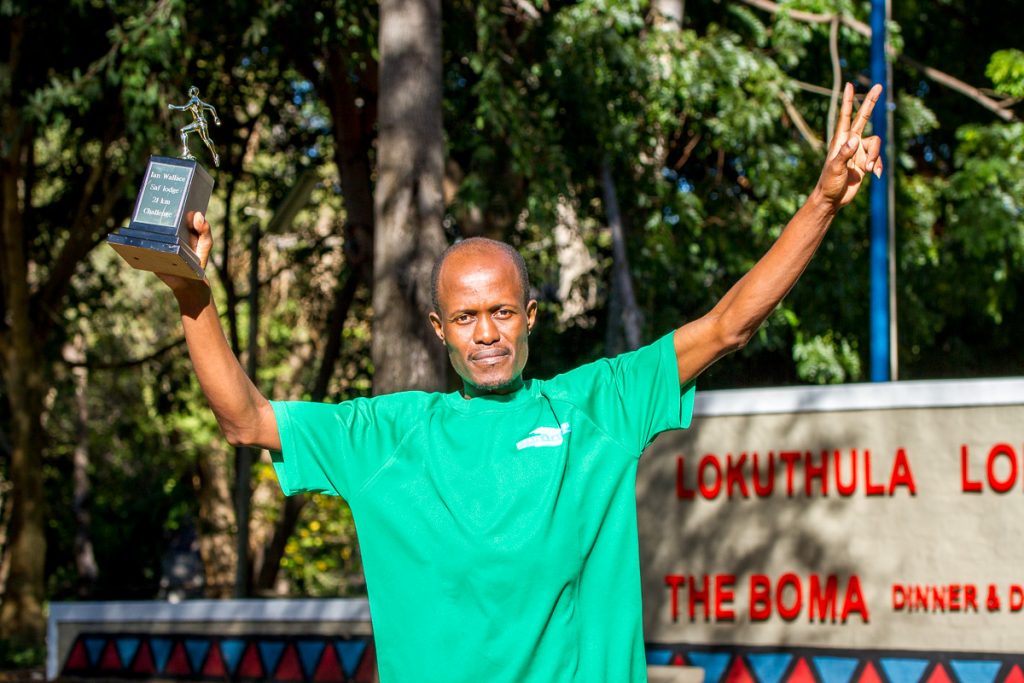 But there is one thing bothering Mpofu … tick tock, tick tock … the father-of-three turns the big 4-0 just before the July 7 event.

Will entering this new decade make him that little bit slower? Will it give his closest rival, Mapfumo, who is three years younger than him, the edge?

“I am going to do my best to hang on to the title, I’m hoping to do it in 1hour 30 minutes. The only person from AAT I know who could beat me is Jaya (Mapfumo)– unless there’s a new employee – but from those that I know it’s Jaya. I’m hoping to beat him this year again, but I know he is younger than me!

“That’s the person I’ll be checking over my shoulder for when I turn a corner to see if he’s near or still far away, unless there’s a new challenger.”

For the past two months Mpofu has been running every day for an hour, usually early in the morning between 6am and 7am, and on his days off he runs for 1 ½ hours or more.

His advice to other runners in the event is to try to maintain the same pace from start to finish. He sets targets, for example, to run the first 10km in 45 minutes, and despite the uphill stretches in the last 6 or 7km of the course, to keep that pace.

“I’m adding a year on every year doing the marathon, but it keeps you healthy, young and allows you to socialise with other runners,” he says.

Mapfumo says his training is going well – he’s been running 10km a day between three and six times a week for the past four months, and he has his sights set on completing the 42.2km full marathon next year. 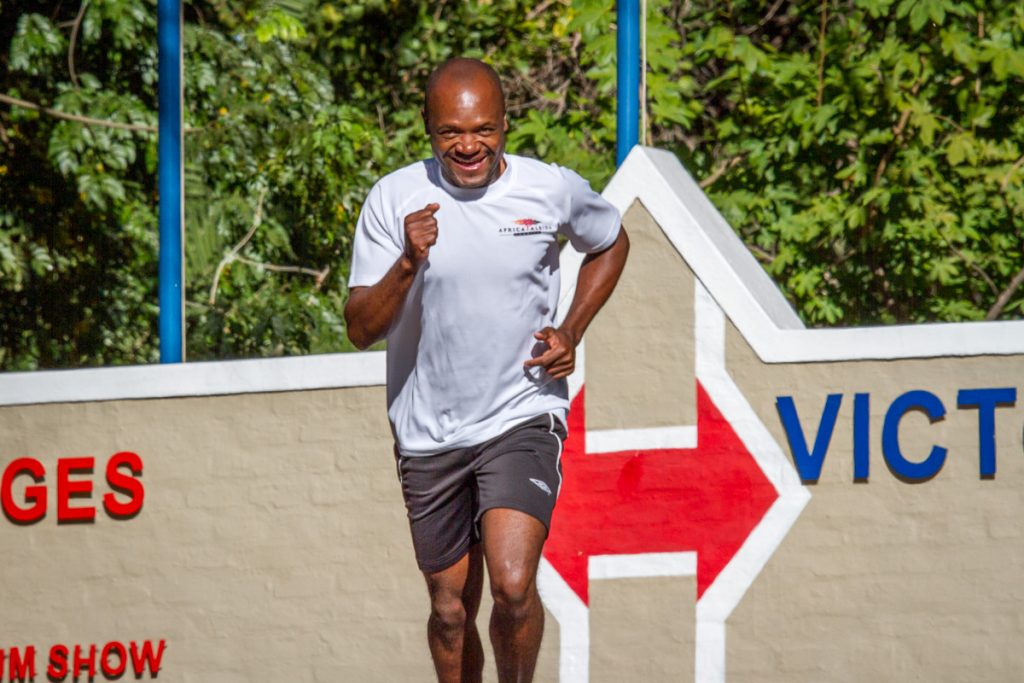 Jaya Mapfumo has his eyes on the prize

It is his seventh Victoria Falls half marathon, and he has only been the first AAT employee once, in 2017, and the one he’s looking out for is Mpofu. “I’m sure I’m going to beat him, I’m very sure”.

Mapfumo’s number one tip to those wishing to do well in such an event, apart from training most days, is to eat a healthy balanced diet.

“I think the diet is the major thing. When you eat a lot of oil, sugar it is very difficult to run, so it’s good to eat lots of vegetables fruits, less sugar, less oil, so you don’t have a big tummy,” he says.

What Mapfumo loves most about this event is the opportunity to mix with different people from different cultures, and the bonus is … “it makes me fit and strong”.

AAT chief executive Ross Kennedy says the runners will wear green and white t-shirts with the slogan “Stepping out for the Vultures” to highlight their plight. The hospitality group plays its role in raising awareness on the challenges faced by these birds through providing a supplementary feeding programme, the Vulture Culture Experience.

“The Vulture Culture Experience which occurs daily at 1pm in front of Victoria Falls Safari Lodge is part of AAT’s corporate social responsibility programme, and aids the survival of these remarkable, but endangered, raptors,” Kennedy says.

“We encourage our staff to live healthy, active lifestyles and to participate in the Victoria Falls marathon. In its first year seven staff ran, and this year a record 89 will take part. We are hugely proud of these statistics, and to support such a wonderful event.”

Of the 89 AAT staff members taking part in the marathon, Augustine Maungwe and Benjamin Bando will compete in the full marathon; 56 will run the half marathon – including new Victoria Falls Safari Lodge general manager Anald Musonza; while 32 will compete in the 7.5km fun race.

Who will lift the Ian Wallace trophy this year? Casper Mpofu, Jaya Mapfumo or an unknown underdog?

Only time will tell! Watch this space …! 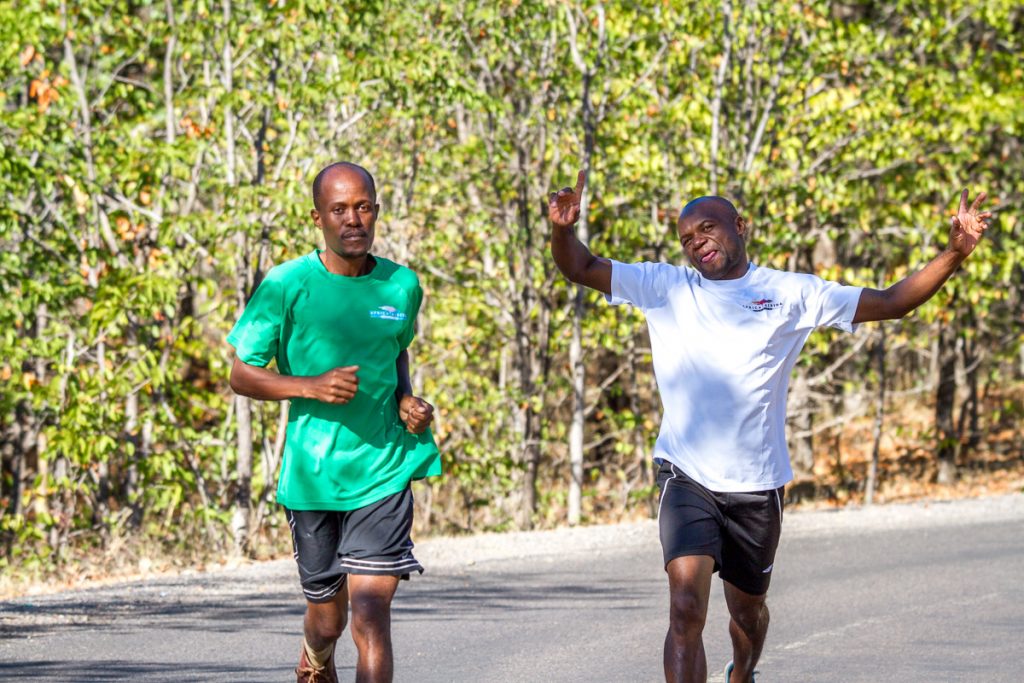