The Importance Of Vulture Conservation In Victoria Falls

A world without vultures would be catastrophic, says leading conservationist Kerri Wolter.

The clock is ticking as the International Union for Conservation of Nature has listed all the species of vultures found in Zimbabwe as either Endangered or Critically Endangered.

According to the Victoria Falls Wildlife Trust the single largest threat to vultures in Zimbabwe is through the malicious poisoning of wildlife.

Another major threat to vultures is traditional healers who use their parts for “muti” (informal medicine), as well as electrocution by powerlines.

Wolter is not optimistic about the future of vultures.

“There is definitely a very real chance we could lose our birds,” she says.

But vultures are crucial to our environment – they keep it clean and functioning as it should by helping to prevent the spread of disease.

“They get rid of carcasses …. without vultures, carcasses would stay there rotting.  If an animal dies of an infectious disease and a vulture eats the carcass, it prevents the spread of disease by consuming the remains so quickly and efficiently.”

With poisoning being the main threat to vultures in the Victoria Falls region, Wolter says, providing them with a safe source of food through a vulture restaurant, such as the one operated at Victoria Falls Safari Lodge, is important to their survival.

The Vulture Culture Experience, where these remarkable raptors are fed on leftover meat scraps and bones from the on-site restaurants, occurs daily at Victoria Falls Safari Lodge. 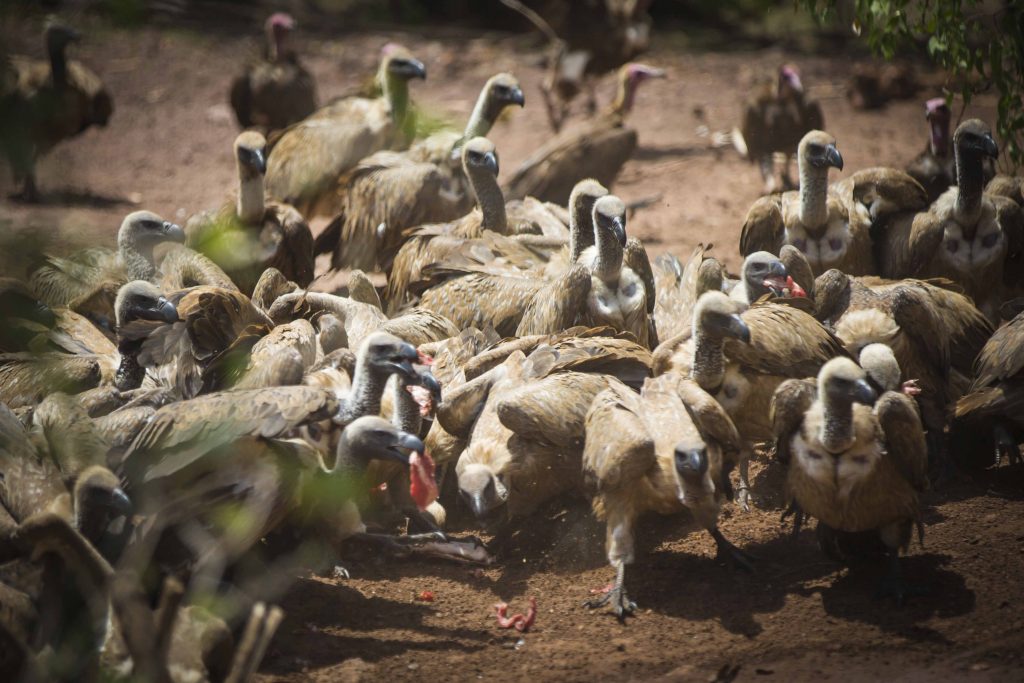 It gives guests the opportunity to witness the spectacular sight of hundreds of vultures swooping to feed, as well as educating them about the ecological importance of vultures and the plight they are facing.

“What I like about the Vulture Culture Experience is they are not being fed enough to fill them, so they don’t become lazy and they still forage for themselves,” Wolter says.

Victoria Falls Safari Lodge’s Vulture Culture Experience is one of 150 active vulture culture restaurants in Southern Africa, but it has something rather special about it …

“It is unique in just how close people can get to the vultures – it’s unheard of … it enables people to have an up close and personal experience with the birds.

Victoria Falls Safari Lodge estate also assists by adding US$1 to selected meals at its inhouse restaurants, with the funds donated to vulture conservation.

In the meantime, is the battle to save vultures from extinction likely to be won?

“We are going to try damn hard to keep those birds alive,” says Wolter.

This means thinking outside the box, such as introducing breeding programmes for conservation purposes, she says.

“There is a need for captive facilities – gone are the days when you can protect species in their natural environment without having ex-situ conservation programmes.”

The large enclosures, provide an environment close to the natural habitat of the vultures, where species can interact as they do in the wild, and breed, with their offspring being released into the wild.

VulPro’s home in Hartbeespoort boasts the world’s largest collection of African vultures, with 250 of the raptors in such a captive facility.

Zimbabwe has no captive facilities yet, but Wolter would like to see one established in Victoria Falls, which could be suitable to hold large number of non-releasable vultures and possibly look at future breeding programmes if the need arises.

The future of vultures is in our hands, and we need to act now to save them.

To find out how you can support vulture conservation please contact gm@saflodge.co.zw or click the button below.