Where Have all the Victoria Falls Vultures Gone? 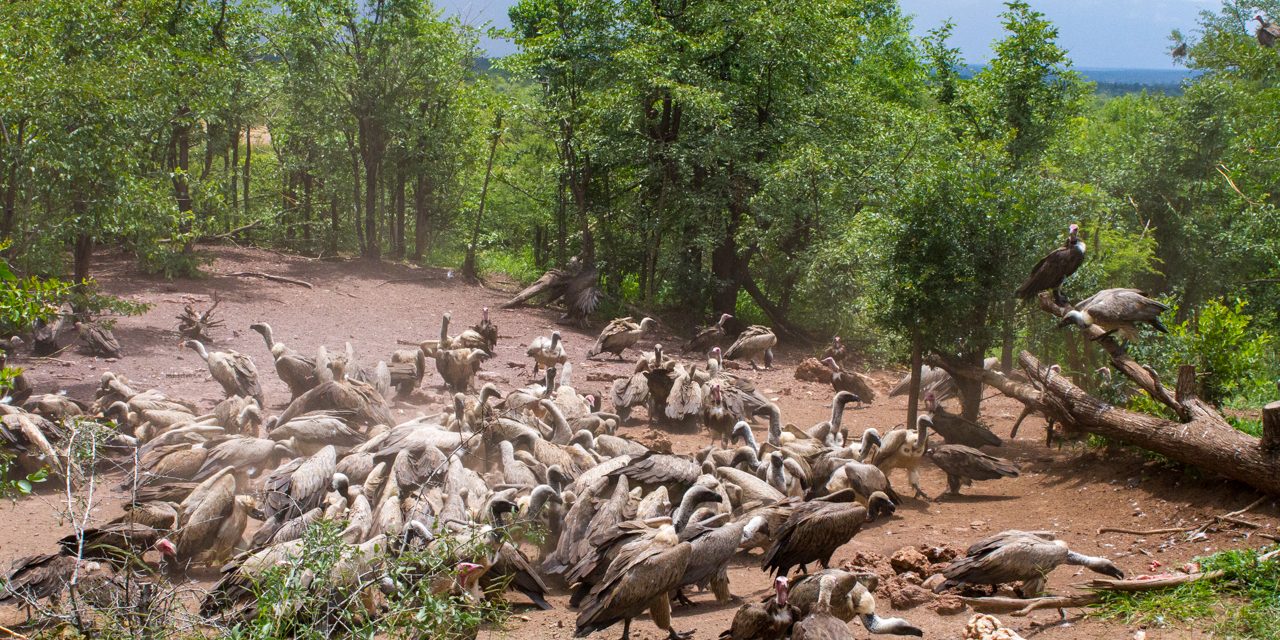 The bodies of 537 vultures were found at the site of poached elephant carcasses in northern
Botswana, but the real toll could be 1,000 or more, as some may have flown away and died, and
chicks left in nests would have starved, Garira says.

“So the population of vultures has dropped dramatically as these are the same vultures which go to
Botswana and back. We used to feed 300 to 350 vultures daily, but now only around 100 vultures
are coming. It will take five to ten years to get the same flock here,” he adds.

He describes this incident as “the biggest loss of vultures in history”, and although there was another
poisoning in Namibia six years previously, it wasn’t quite as big.

Previously Garira says he used to sometimes see lappet-faced and white-headed vultures also
feeding in amongst the crowd of predominantly white-backed and hooded vultures, but in the past
eight months he’s seen none.

However, there has been a little silver lining lately … since December the numbers coming to feed
are up ten per cent, due to the babies, which are born around the middle of the year, being strong
enough to leave their nests after four or five months.

“It’s (the poisoning incident) had a very big impact … and if we don’t do anything (to conserve the
vultures) in 50 years to come there may be no vultures left on Earth,” Garira says.

Victoria Falls Wildlife Trust wildlife and research manager Roger Parry says seven elephants were
shot in a remote area north of Nata, and three of their bodies laced with carbofuran to poison the
vultures so they could not alert law enforcement authorities to the poachers’ location.

“It was disastrous … it’s quite sick actually,” Parry says.

His estimate of the toll is more conservative, saying in addition to the 537 dead (mostly white-
backed vultures found at the site), up to 180 more birds may have perished due to the incident, and
that the population would take five to eight years to recover.

“After this incident we found a dead vulture 120km away in the Zambezi National Park, and we
tested it, and it came back positive for carbofuran, the same poison used in the poaching incident, so
we suspect it was linked to that.”

Parry says there has been a definite decline in vultures at the Vulture Culture Experience since last
year, with a 10-day monitoring project showing numbers were down on average by 11 per cent, but
day to day numbers fluctuate depending on whether there are other carcasses in the area.

“We are speculating this drop in numbers is as a result of the poisoning, but it can’t be confirmed.”

Parry says the incident had highlighted a concerning gap in the monitoring of vultures, prompting a
meeting in Victoria Falls next month with counterparts from Botswana, Namibia and Zambia to
develop a logistical and coordinated approach to vulture conservation.

Parry envisions a multi-pronged approach, which, in addition to improving vulture monitoring, would
see resources put in place to respond quickly to poisoning incidents so the site is cleaned up before
more damage is done.

He also hoped to focus on education, law enforcement and poison control, which would include the
removal of some of the poisons favoured by poachers from the market.

White-backed, lappet-faced, hooded, white-headed, palmut and Cape vultures are found in
Zimbabwe, and all of them have been listed by the International Union for Conservation of Nature as
either endangered or critically endangered.

This is followed by accidental poisoning, for example, if a farmer poisons a predator, and the carcass
is consumed by a vulture, or through veterinary drugs, particularly, diclofenac, an anti-inflammatory
commonly used to treat livestock, which kills vultures.

Vulture restaurants play an important role in providing a safe food source for these birds, and while
some argue they create a dependency, not enough food is provided to sustain them, so while birds
have habituated to feed at the vulture restaurants, they are not dependent on them, he says.

The Vulture Culture Experience which occurs at 1pm daily in front of Victoria Falls Safari Lodge treats
visitors to the spectacular sight of vultures swooping to feed on leftover meat scraps and bones from
the onsite restaurants, and gives an insight to their ecological importance and the plight they face.

Vultures are crucial to our environment – they keep it clean and functioning as it should by helping
to prevent the spread of disease, such as rabies and anthrax, by consuming carcasses.